This is the archive page description 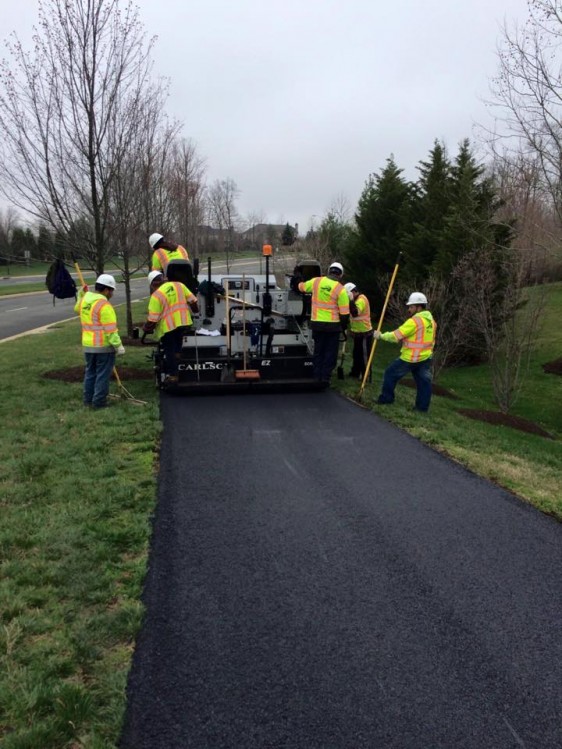 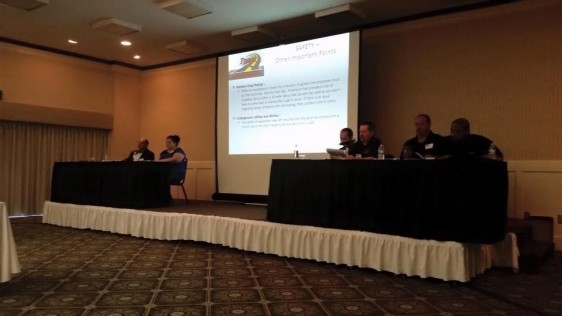 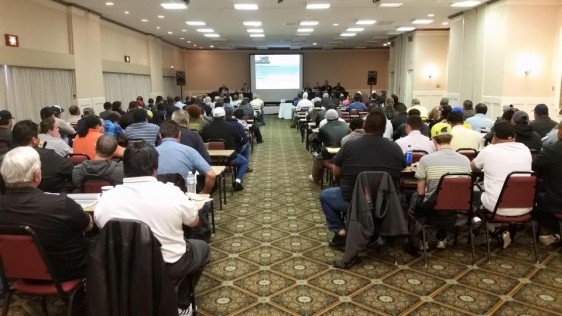 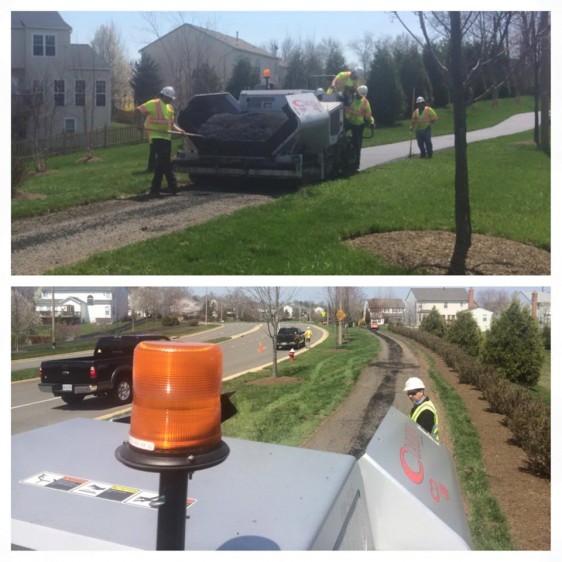 First day of the 2015 sealcoating season. What a beautiful spring day it was!

This past Thursday Erick Finley and Jay Verhaeghe exhibited at the Central VA Apartment Associations annual conference The event was hosted at the Omni hotel located in Richmond, VA. 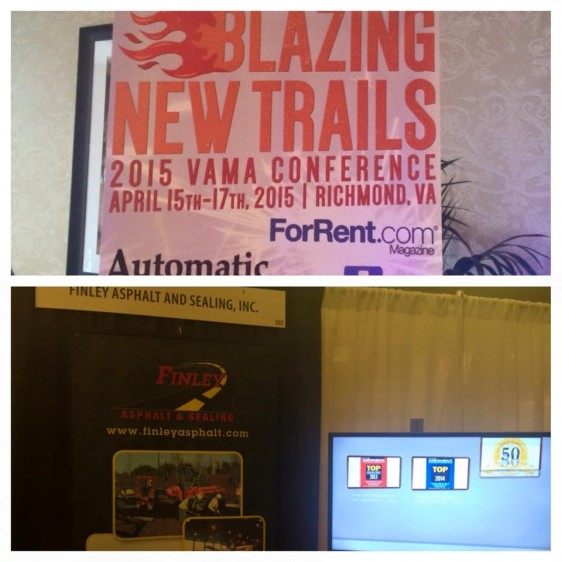 ASPHALT REPAIRS AT THE VA 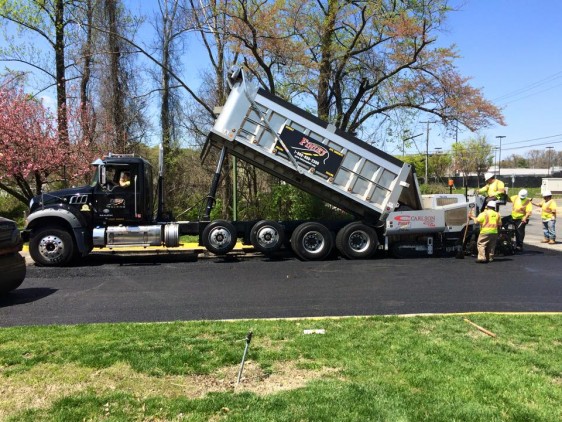 CELEBRATING A GOLDEN ANNIVERSARY WITH A PAIR OF SPECIAL SILVER PAVERS

The traditional 50th anniversary present is gold. But why stick to something so basic when celebrating such a momentous milestone? Finley Asphalt & Sealing, Inc., of D.C. and Virginia, decided to go for something a little flashier.

The traditional 50th anniversary present is gold. But why stick to something so basic when celebrating such a momentous milestone? Finley Asphalt & Sealing, Inc., of D.C. and Virginia, decided to go for something a little flashier. The family-owned business rang in its 50th anniversary earlier this year with two shiny, sparkling and brand new Carlson Paving Products CP100 Pavers…custom painted silver.

Fifty years in the asphalt maintenance industry is indeed something to celebrate. Founded by Lonnie L. Finley, Sr. in Fairfax, Va., in 1965, The Finley Paving Company earned a reputation for quality and service in the D.C. area. After Lonnie’s passing in 1990, his two sons Erick and Lewis Finley took the reins. In 1995, the two re-invented the company to what it is now: Finley Asphalt and Sealing, Inc., which focuses entirely on commercial asphalt and the maintenance and repair of asphalt. Gradually over the years, the concrete division, and excavation and utility crews were added and the company became a fully self-reliant entity able to perform its own concrete work, and projects such as road widening, parking lot expansions, and drainage projects.

Needing two new pavers for the 2015 season, and celebrating the big five-o, Lewis Finley, president of Finley Asphalt & Sealing, figured it would be the perfect occasion to gift the company with some very special equipment.

“We evaluate all of our equipment needs at the end of each season and this past year we decided we needed additional pavers. It just happened to be the same year of our 50th Anniversary so we thought we’d do something different,” said Finley. The pavers were part of the big anniversary celebration/open house held at Finley’s new regional office in Richmond, Va., that included a BBQ, games and raffles.

When it came to choosing what pavers to buy for its golden anniversary, Finley knew right away that they would be Carlson pavers. Having previous experience with Carlson screeds on all of their highway-class pavers, the Finley crew really respected the Carlson brand.

“We have used many other brands in the past and have run into issues with reliability and durability, especially with the kind of work we put the equipment through. We have been looking into Carlson pavers for many years and have already been using Carlson screeds on some of our paving equipment,” said Finley. “The screeds could endure rough handling and lasted a long time.”

It only made sense that when it came to buying new pavers that the Finley crew would end up picking out two Carlson CP100 pavers. They were impressed by the great build quality and the versatility of the Carlson platform. “We knew that after attending the live demo of the CP100 and being able to have a chance to run the paver for a couple hours, this was the paver for us.”

With a one-piece construction design and the heaviest components in the commercial class market, the Carlson CP100 reigns in durability. In addition, a fully supported poly pad track system protected with rock guards increases the lifecycle and reliability of the undercarriage. Contractors also appreciate the large capacity hydraulic system and fuel tank, which keep the temperature down and the production up.

Having used the pavers for a few months now, the Finley team says that the pavers have been performing great, as they had expected. Among the many features of the CP100, one of their favorite features of the Carlson pavers is the screed, which has been a game changer for Finley. Being able to use the Carlson quality screeds on a smaller platform allows them to bring the same quality to all their projects, regardless size. One notable example was the parking lot at the U.S. Department of Agriculture building in Washington, DC. “It was a smaller parking lot and being in the city, having the versatility of a smaller paver that can bring the quality of our other pavers really made this project go by without a hitch,” recalls Finley.

Looking back on the purchase of the two Carlson pavers, there is only high praise for the machines and their positive effect on the company. “We knew these were the ones we wanted and they both have been
fantastic,” added Finley. Not only have they had wide ranging benefits on jobsites, but the two silver CP100s have also helped in determining the future look of all Finley machines. As Finley notes, “Currently, we are in the process of changing all of our owned equipment to a silver and black color scheme to match the two CP100 pavers.”

With the end of the year approaching, the company plans to evaluate their revenue and efficiency with their new machines and look ahead to their 51st paving season. And as the company continues to grow and attain new milestones, it is likely that Carlson will continue to be part of the company’s bright future. 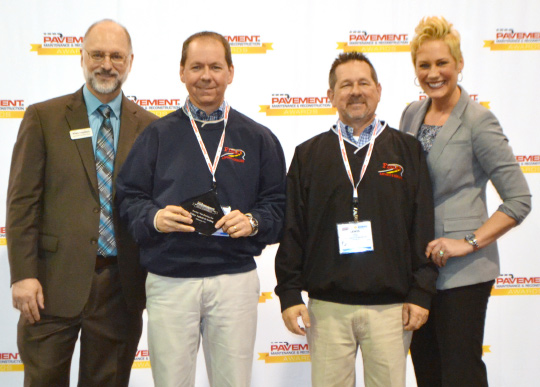 Finley Asphalt & Concrete is a family owned and operated business with over 50 years of experience serving the Mid-Atlantic region. Finley Asphalt has earned a well-deserved reputation as one of the premier commercial contractor of asphalt and concrete by providing customers with superior service and maintaining exceptional quality. From the federal and state governments to homeowner associations and commercial properties, Finley has preserved the family tradition of strong work ethic and quality assurance by backing every project with a 100% guarantee. 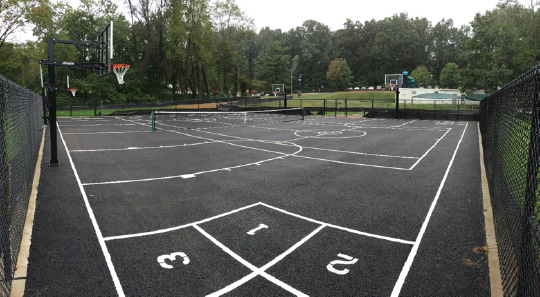 “The Pavement Awards, now in their second year, shine a spotlight on individuals and companies who have made a difference in our industry,” said Allan Heydorn, editor of Pavement Maintenance & Reconstruction. “We appreciate their quality work and their contributions and are proud to recognize them.”

The Pavement editorial staff, in conjunction with the Pavement Advisory Board, evaluated the nominations and selected the winners. Pavement’s February issue profiles the industry award winners; additional information is available online at ForConstructionPros.com/pavement-maintenance.

2015 was one of the best years on record for Finley Asphalt & Sealing! Some highlights include being recognized for the third year in a row as one of the nation’s top contractors, receiving a national award for one of our projects, having numerous articles published, and most important, we celebrated 50 years in business. With all the work we were able to complete in the middle of December, we can also say that this has been one of the longest years in our company’s history. In honor of this year, we have put together a short clip looking back on some of our projects. We would like to thank all of our clients and partners for a fantastic year and we are looking forward to an even better one in 2016!

MANASSAS, VA – Virginia-based Finley Asphalt & Sealing was recently named one of the United States’ top paving contractors by Pavement Maintenance & Reconstruction magazine’ annual Top Contractors issue. This year Finley was named to all the Top Contractor categories, this includes for the fourth consecutive year being named to the “Paving 75”, “Pavement Repair 75”, “Sealcoating 75”, and “Striping 75” lists.

“It’s an unbelievable honor to be recognized for the fourth consecutive year as one of the nation’s top contractors” said Erick Finley, CEO. “Winning this award is a true testament to the dedication to quality from everyone on the Finley Team”

The magazine’s Top Contractors lists cover four categories: pavers, sealcoaters, stripers, and sweepers. Each category represents the top contractors in the nation based on sales totals for the 2015 fiscal year. To learn more, and to view the list in its entirety, visit here. 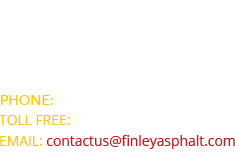